Job Status - This indicates the stage or status of the production process that a job has reached. In many cases the job status will automatically be updated by running certain functions. The status can also be manually changed, by choosing a status from the drop list on the Job Master screen.

Planning – This is the initial status for all jobs. Jobs should remain in this state until bids are requested, the job is canceled or the job is awarded without bidding.

When an RFQ is sent out P3Expeditor asks the user if they want to change the Job status to “Bids Requested”.

Bids Requested – This status indicates that price quotes have been requested from suppliers and the user is waiting for them to be submitted. Once all bids are in the status may be changed to “Reviewing Prices”. If a proposal is sent out for the job P3Expeditor will suggest changing the status to “Reviewing Prices”. When a job award is made the P3Expeditor suggests changing the status to “Awarded”.

Reviewing Prices – This status should be used for jobs, which have received all their price quotes and/or have had a proposal generated and sent to the customer for review.

The “Award Job” function designates a single supplier as the primary supplier for a job and triggers an option to change the status to ordered.

Awarded – The awarded status should be used to indicate that a primary supplier has been selected for the job, but a production order has not been issued.

After a job is awarded the user may create an “Order” for the job using the Order Job function and dialog. When closed the Order Job dialog will ask the user about changing the job status to “Ordered”.

When the status on a job shifts from “Awarded” to “Ordered” Several changes occur:

Ordered – Once a production order has been issued to the supplier the status should be changed to “Ordered”. This indicates the job is a live order. The job should remain at the “Ordered” status until it is completed, canceled or put on hold.

The “Complete Job” function changes the job status to complete and reminds the user to evaluate the supplier’s performance on the job.

Complete – Once an order has been shipped by the supplier and received as desired, the job status should be changed to complete. A buyer may still be waiting for an invoice and other paperwork, but the complete status indicates that the production work is complete.

Once all paperwork is done for a “Complete” job the user may want to remove it from their daily job list by un-checking the “Active” check box.

Canceled – Jobs that have been canceled should be set to a status of “canceled”. In most cases canceled jobs should also be deactivated, so they will not appear on the users active job list.

On Hold – The “On Hold” status should be used for jobs that have for some reason been delayed for an indefinite period of time. Eventually these jobs should be canceled or returned to one of the other production status settings.

The Active Checkbox – The Active checkbox indicates if the job is still being processed. The job list and calendar display only Active jobs. Jobs that are not active may be viewed from the job list by turning the “Show Active Jobs Only” checkbox off. When you are done with a job the Active check box should be unchecked, to separate the job from your “live” work.

Deactivate Jobs When You Are Done with Them

Here's a quick tip for P3Expeditor users. When you have finished working on a particular job and no longer need it on your daily Job List, deactivate it. The job information will still be accessible, but you will not have to look at it every time you open your Job List. 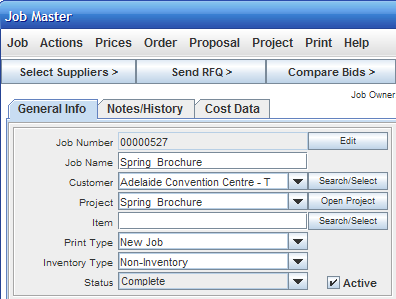 To see both active and inactive jobs on the Job List, simply uncheck the box labeled "Show Active Jobs Only" near the top of the Job List window. This will cause both the inactive old jobs and active new jobs to show.

So, if you have a lot of old jobs sitting on your Job List you can clean them up quickly. You'll thank yourself the next time you open your job list and your key jobs are sitting right there.